I found this recipe in the BH&G New Dieters Cookbook. I made it exactly as directed and it is pretty good. I like the dried apple flavor. It does not taste anything like the Quaker Natural Granola that I buy, but it is nice and easy and especially tasty with yogurt and fruit. Most importantly, the kids gave me their approval!!! I did not stir it quite enough towards the end, so the edges browned a little more than I would have liked. It probably needs about 4-5 times being flipped around in the pan to prevent over cooking in one area. 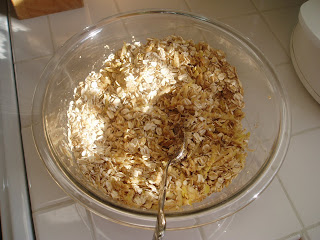 In a small saucepan stir together honey, water and cinnamon. Heat to boiling; remove from heat. Stir in vanilla or almond extract. Pour over oat mixture: mix well. 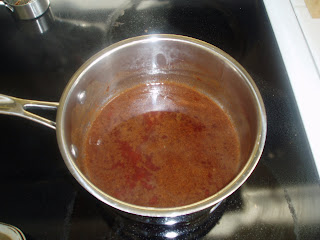 Spray a 15x10x1 inch baking pan with nonstick cooking spray. Spread oat mixture evenly in pan. Bake in a 325 degree oven about 45 minutes or until golden brown, stirring occasionally 4-5x's. Remove from oven to cool completely (it suggests spreading on aluminum foil, though I left it on the tray to cool) To store, place cooled granola in a n airtight container in the refrigerator for up to 2 weeks. Serve with milk or yogurt and fruit. 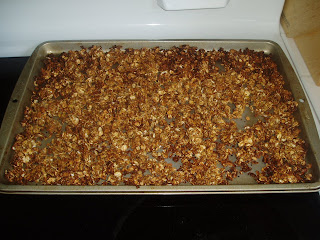 You have entered a recipe sharing site designed to offer families new "yummie" recipe ideas that have been tested and enjoyed. You don't have to be a "mummie" to join us! Happy looking and happy cooking!

I figured it was about time I posted a pic of me shoving food in my mouth too! :)

If you tried a recipe...

Please share your reaction at the bottom of the post. You can leave a comment or simply click "A+", "Easy","Good" or "Not Again" You can choose more than one, Ex: "Good and Easy". There may be a recipe you would cook again because it was easy, but it wasn't the best thing you've tasted. So, let us know your opinion!

Hi everyone! I thought I'd tell you a little about me.
I am a SAHM, named Heather, who loves to cook!
At one point I almost went to the CIA (that is the Culinary Institute of America), but I changed my path and got my degree in Education. I really enjoy trying new recipes, so I decided to start this recipe sharing blog to gather a bunch of new ideas and help others come up with new ideas for their families! Thank you for coming and checking it out! Please email me if you have some recipes to share! :)